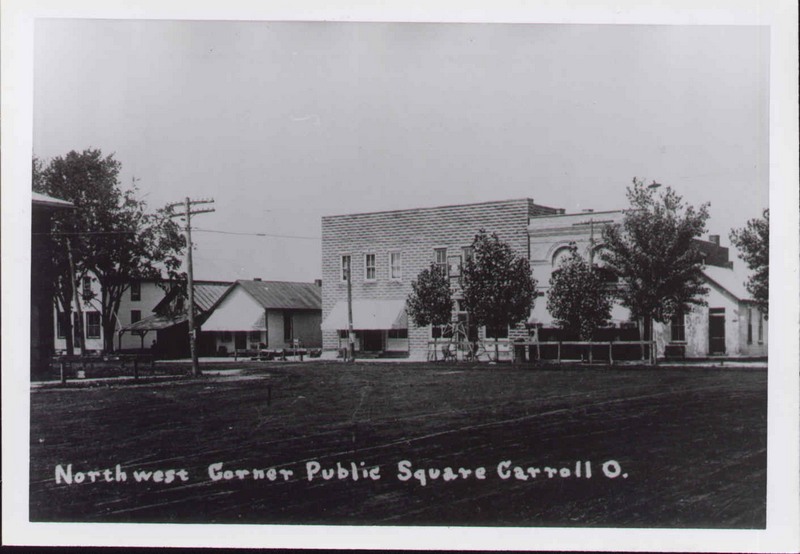 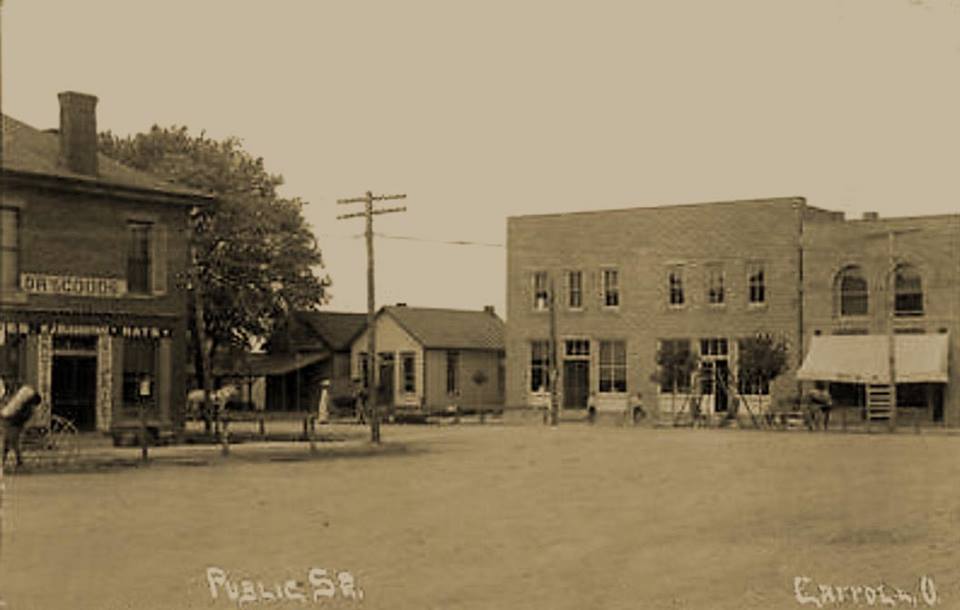 TOP Photo - Right to Left:  The third (small) building still stands, was recently renovated, and is now a private residence. Starting in about 1900, this building once served as the village's post office for 45 years (source Tammy Drobina). The building to the far right currently stands and was more recently the former bank / Atwood Door building (the adjacent buildings to its left no longer exist - a gated parking lot for that business now occupies that space).

BOTTOM Photo:  This appears to be an earlier photo - note the less mature trees in front of the business buildings. In this photo, the former dry goods store (currently the Lion's Club Building) is shown - note presence of the horse and buggy / hitching rails.
​ 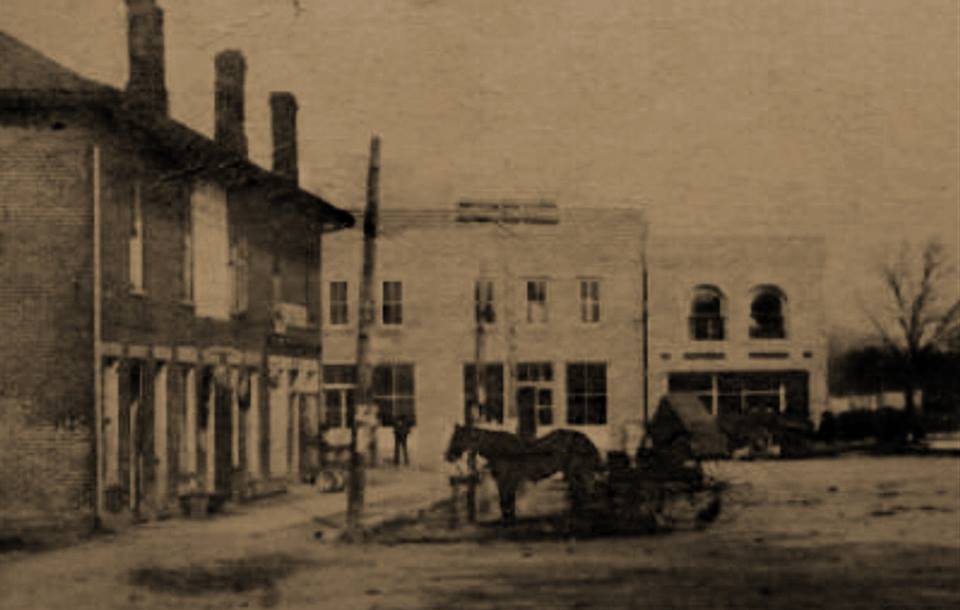 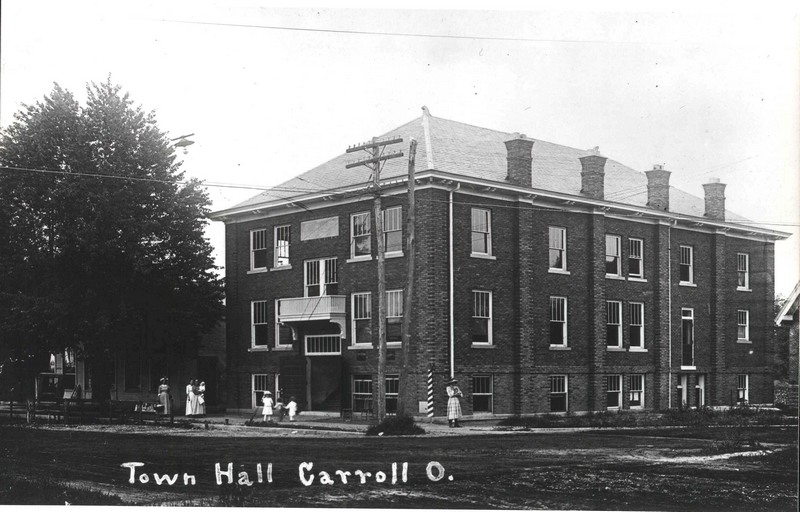 The former Carroll Town Hall.  This building was built in 1911 and razed in 1968. The Carroll Municipal Office was built in its exact location (corner of Center and Park Streets). Since the 1910 (new) Carroll High School did not have an auditorium or gym, the Town Hall served as the community location for plays, basketball games, and social gatherings. Carroll's first fire department was located here. The building also housed a doctor's office, a barber shop (note the striped barber pole, and even a police department/jail facility.
​
West Market Street: 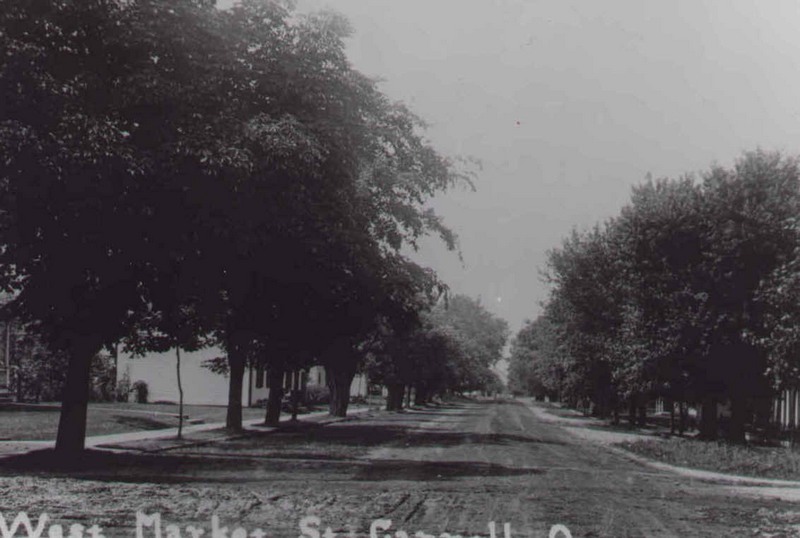 One of several early postcards of Carroll - circa 1910. This one is a view of West Market Street (looking east). Note the unpaved street and many trees.
​
Carroll Train Depot: 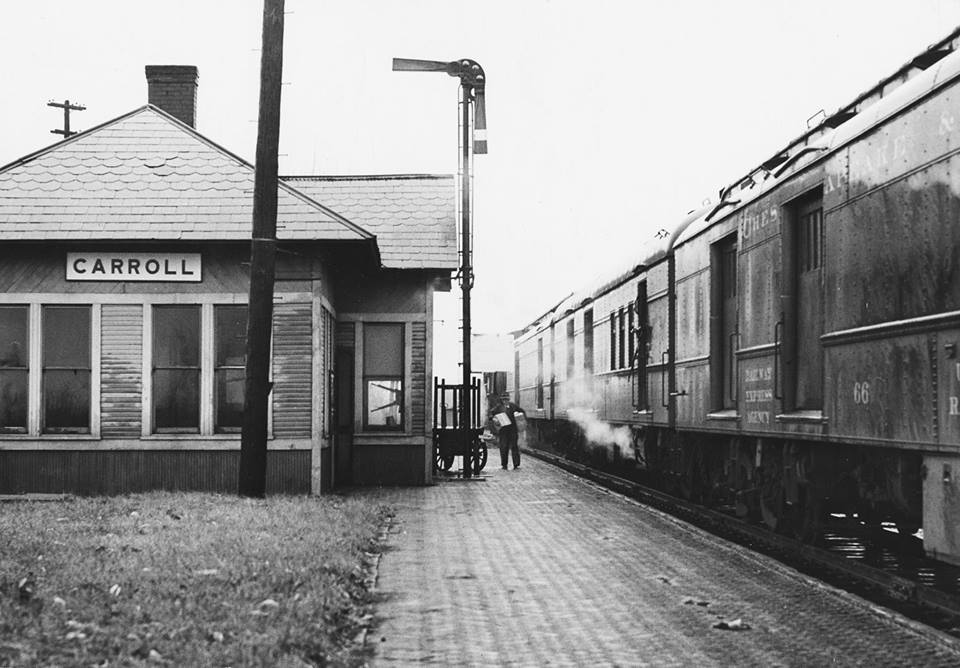 Photo circa 1949, the second Carroll Train Depot - Hocking Valley Chesapeake and Ohio Railroad.  This replaced the former depot that burred down in 1905. This depot believed to have been built at some point soon after that fire. This building was moved to the Fairfield County Fairgrounds in 1966 and preserved for community members to experience. The three rooms of the depot included a waiting room for passengers, an agent room to sell tickets and send telegraph messages, and a room to manage freight.
​ 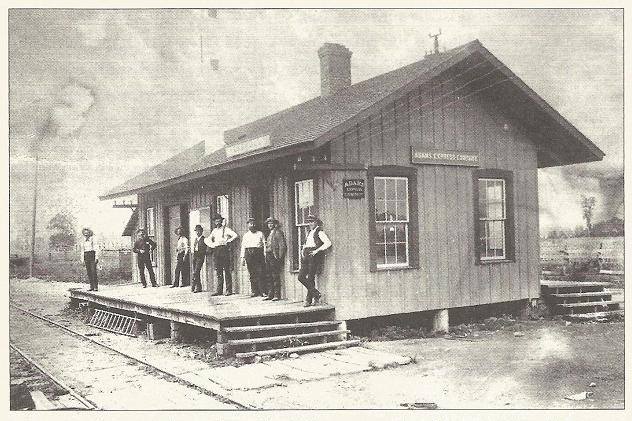 The original Carroll Train Depot, which was built around 1870 (some sources cite 1869, others 1871) and destroyed by fire in 1905.
The Greenfield Academy 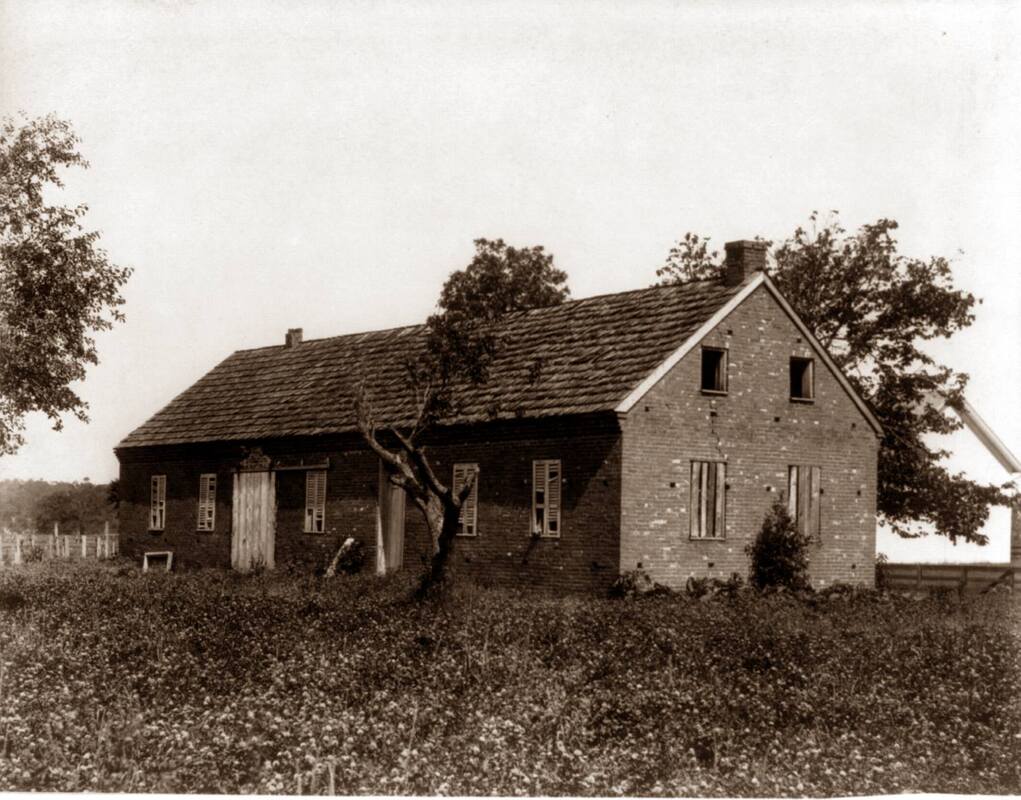 One of the earlier educational institutions, The Greenfield Academy was founded by Dr. John Williams in 1935 and continued until 1846.  Dr. Williams was a scholar who established this school to educate young men for honorable professions.  The structure was located approximately 5 miles from Lancaster on the Carroll Pike in Greenfield Township.  A frame dwelling was later built on the former site adjacent to a Presbyterian Church.  A list of attendees is included on this website:
​https://carrollareahistoricalsociety.weebly.com/greenfield-academy-by-wiseman.html
​Carroll Methodist Church: 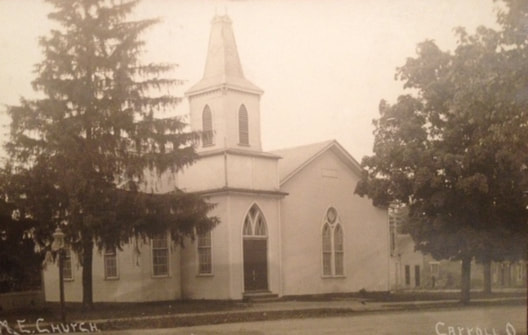 ​Another early postcard of Carroll. Postmark date is 1912. This is the original Carroll Methodist Church that dates back to 1854 and was located on Center Street. It was later replaced with a larger, brick structure in this exact location (see photo below). Note the gaslight on the left. A creamery was once located to the right of the building. Interesting to note, this postcard is marked 1912, which is the year that the new brick church was erected. This may have been one of the last photos of this quaint frame church.
​
Carroll M. E. Church: 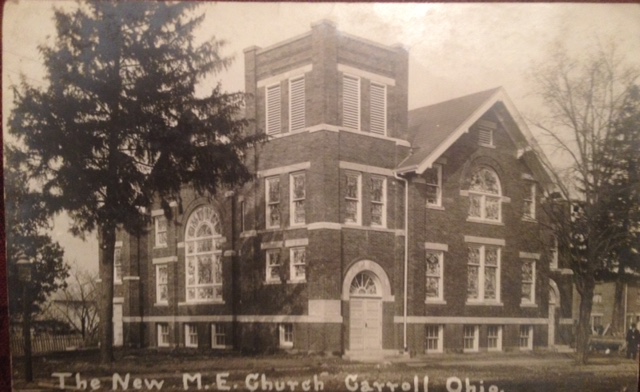 Another early postcard, this is the 'New M. E. Church'. This was built in 1912 and replaced the former frame church. Note the beautiful brick construction with numerous stained glass windows. This building is now a fabulously restored private residence.
​
Railway - 3rd Rail: 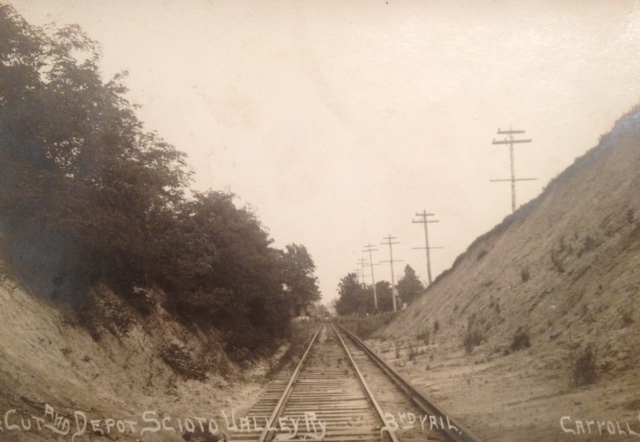 A rare, unusual postcard postmarked 1908. This is the 'Big Cut and Depot Scioto Valley Railway - 3rd Rail'. The photo directly below shows the correspondence on the back of the postcard. 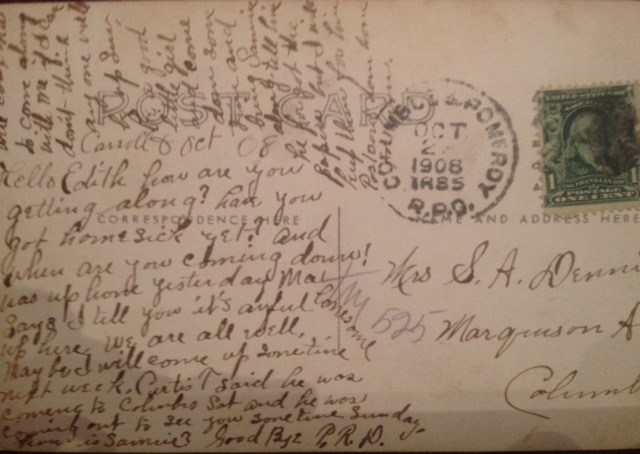 An interesting note penned in 1908 on the back of the postcard displayed above (railway bed photo). The writer wonders if 'Edith is homesick', wants to know when she plans to 'come down' (to visit), and to 'bring Sammie along', then adds that 'Ma says it's awful lonesome up here'. Note the use of just about every available inch of writing space on the card and the One Cent postage stamp.
​
Rainbow Bridge - Carroll-Northern Road: 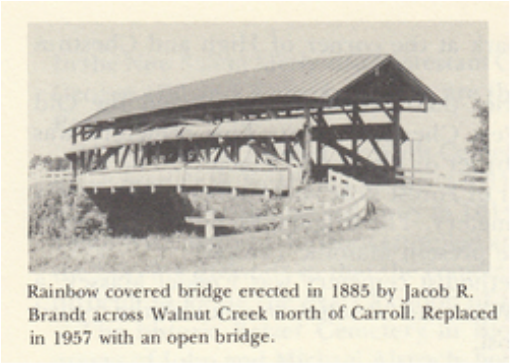 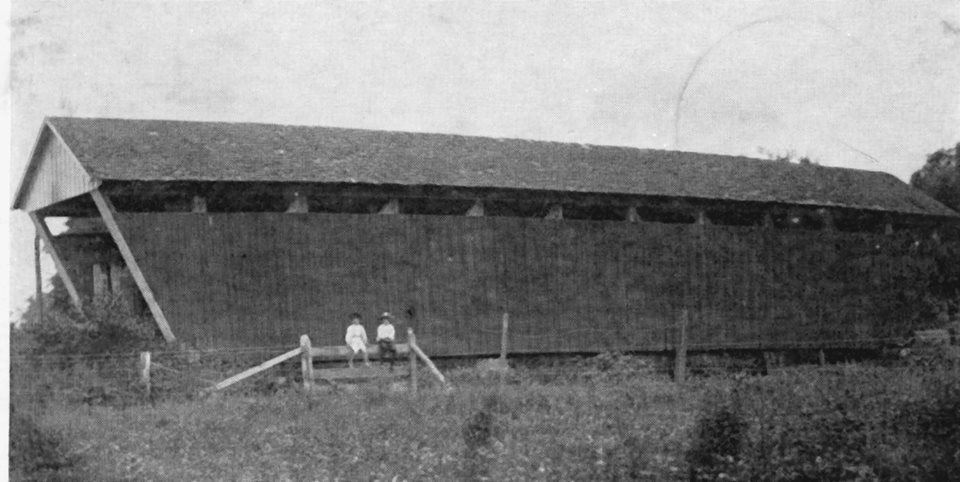 Circa 1890 and spanned the former Ohio Erie Canal that once crossed over Beaver St./Carnes Road across from where the former GTFD Station (now Carroll Civic Center) is located.
Rock Mill: 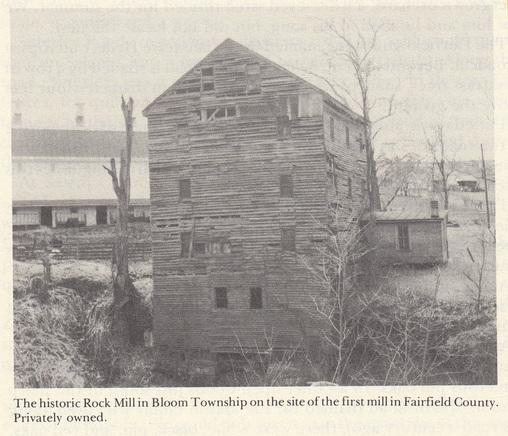 Previously, Rock Mill was privately owned, however was donated by Robert & Rita Stebelton to the Fairfield County Historical Parks system. It has been wonderfully preserved and restored. Note the large barn in the background - it still exists today. The photo below is of Rock Mill today - completely restored including new water wheel. For more information about Rock Mill, visit:  http://www.historicalparks.org/rock-mill-park/ 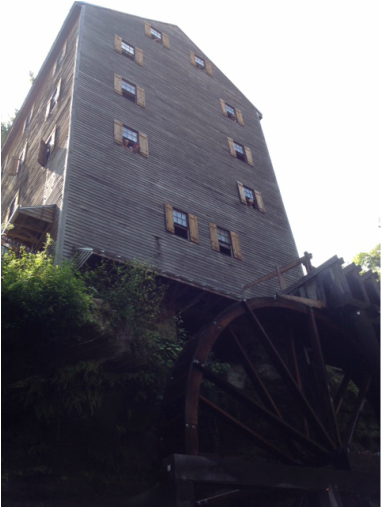 Beautiful mural painted by Bloom-Carroll High School Students in 2005 on the side of a building located on the corner of Center and Canal Streets.This was copied from an original early photo of a state canal boat, the Dick Gorham. Mr. Gorham settled in the area in 1832 and operated a drug store in the village.
Click here to return to the Top of this page